On The Trail – Mars In Oregon 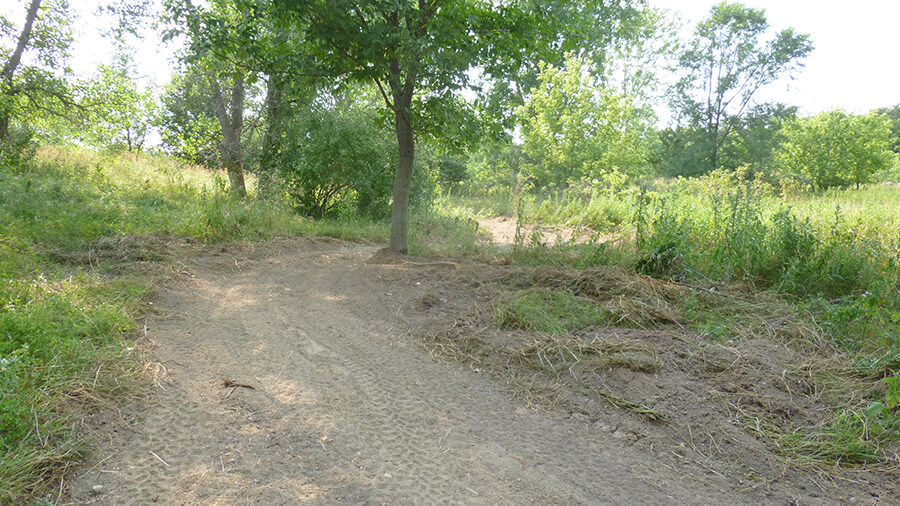 It looked like the movie set from “Total Recall” or at least a Martian dumping ground. The Groundhog Quarry Play Area in the heart of East Fort Rock OHV Trail Area in central Oregon was nothing like we’d seen before. Sure, we have ridden ATVs in gravel pits, but this rocky locale looked more like someone took a piece of the red planet and transplanted it in the Deschutes National Forest.

We visited the East Fort Rock riding area in late June as part of the Yamaha Raptor 700R press intro. We were amazed with the trail design, signage and overall makeup of this OHV destination, but somewhat disappointed we didn’t have utility quads to explore the little part of Mars we’d found in Oregon. That’s OK, it gives us a reason to go back. We rode for only one day and would need at least a full weekend to explore the entire area of this Oregon OHV jewel.

De-Shoots!
Oregon’s Deschutes (De-shoots) National Forest, located in the Pacific Northwest’s Cascade Mountains, is visited by more than 8 million recreational adventurers a year. It’s a four-season vacation wonderland offering dozens of recreational activities. From hiking to equestrian and white-water rafting to downhill skiing, this forest has something for everyone. And in 1993, off-road ATV riding joined the mix.

Today, the East Fort Rock OHV Trail System offers more than 300 miles of trails and encompasses some 110,000 acres. The multi-use trails accommodate riders of every skill set and climb from 4,400 feet to 6,400 feet throughout this desert highland. Fifty-three of those 300-plus miles are named “Chesley’s Challenge,” to commemorate the fortitude displayed by George Chesley. The former East Fort Rock District Ranger is credited with creating this trail system. OHV organizations, local clubs and volunteers continue his efforts today.

Trails
Similar to downhill ski resorts, East Fort Rock uses colors and shapes as trail descriptions and guidelines. However, unlike the ski slopes, these trails are two-way trails so additional signage is needed. A vertical trail marker is accompanied by a black diamond (most difficult), a blue square (more difficult) or a green circle (easiest.) The posts also have a directional arrow and a trail number. The arrows and numbers came in handy while riding in the thick dust. While riding in a group, we hung back and spaced ourselves during our ride, and the directional markers and trail numbers prevented us from getting lost.

“Reassurance markers” informed us that we were still on the correct trail and that’s a comforting benefit. We didn’t need to worry as much about going the wrong way. Depending on their location and the trail design, some markers contain traffic signs like “yield,” “stop,” “caution” and so on.

Due to its Pacific Northwest location, signs warn of logging. Temporary signs are posted to notify visitors of trail grooming. That’s right, with more than 300 miles of trails and the high-desert soil, the trails need to be regularly maintained. Because the trails intersect and join to legal forest roads, we could create any loop we wanted to. We could make a 3.5-mile loop or increase it to 10 or 20 miles, depending on our mood. As long as the designated roads and trails are open to quads, then you can customize your own scenic trip or even a fast-paced “race” loop. It was fun to mix in tight, winding trails with some high-speed runs and hills. But we also loved blasting down the shared-use roads before jumping back into the woods.

These trails have everything, from rocks to trees to hill climbs and whoops. One thing we didn’t run across was mud. We visited during the start of the dry season, so the dust was a major setback. One of our favorite trails is No. 70. For one reason, it took us from Mars (the Groundhog Quarry Play Area) to our staging area at Road 25. This trail is fast and tricky. Think of it as a high-speed, twisty trail with numerous tight, technical lava beds mixed in. The jagged rocks forced us to slow to a snails pace, hang on and strategically crawl through. Once we cleared the old lava beds, we could increase our speeds again until we came upon another section of rock.

Like many of the play areas, Trail No. 51 looked like it was from another part of the country and it was tough. Barely 50 inches wide and with several dozens of 90-degree turns, this trail proved to be fun and difficult. When we combined No. 51 with trail 60, 64, 65, and 50, we created our own miniature race course, dust and all!

The East Fort Rock OHV Trail System has three other staging area Yamaha chose (Road 25), but South Lava Trailhead at the far south end of the riding area is next to one of the area’s unique play areas.

Again, the Groundhog Quarry was best suited for four-wheel-drive quads. In fact, we only traversed about 20 percent of that area due to us having a sport quad and not a ute. There were too many sharp-edged, bowling-ball sized rocks to avoid or climb. However, the huge gravel pile in the center of the play area, when combined with the surrounding trails (No. 74 and No. 76), was more fun on sport quads. It was the surrounding area that made us think of Mars. Colorful patterns of rocks of all shapes and sizes. Greens, yellows, reds and various other colors popped out from the glittery rocks.

Required Here!
Though not as harsh as the 93dB level required at the Oregon Dunes, the East Fort Rock riding area requires that all ATVs and motorcycles to meet the DEQ noise standard of 99dB or less (using the 20-inch test). All exhaust systems also must use a USFS-approved spark arrestor to be considered “trail legal.” Machines found to be operated without spark arrestors will be fined $100.

It’s also imperative for all visitors to have the appropriate off-road riding permit or “ATV sticker.” Ride without one and you’ll be fined $75. Quads and motorcycles that are licensed (stickered) in a different state can legally ride the trails. However, if visitors from other states do not have ATV “sticker” programs, they must purchase an Oregon non-resident off-road operating permit. The operating permits are available at local shops and forest offices. Call for details on this mandatory item.

Any rider under the age of 18 must wear a helmet or they will be assessed a $75 fine. Also, all riders must either show proof of a driver’s license or operator’s permit, or in the case of a minor, must be with an adult who possesses one of these items.

Having Fund
The multi-use trails are legally open to ATVs (Class 1: quads and three-wheelers) and motorcycles (Class III) less than 50 inches wide. The East Fort Rock trails are operated and maintained by the Forest Service, Oregon ATV Fund, Central Oregon Motorcycle and ATV Club and various other volunteers.

The Central Oregon Combined OHV Operations Group manages all of the Forest Service and BLM-designated OHV trails in Central Oregon. This group manages seven trail systems and roughly 640 miles of trails, including eight designated play areas. Grants and “agency” dollars provide the COHVOPS with a yearly operating budget of around $340,000. The funds cover the cost of the program and maintain the facilities, trails, signage, fencing and miscellaneous trail expenses. This group also educates and enforces some 50,000 annual visitors.

A Volunteer Trail Ranger program exists within the COHVOPS. The volunteers officially represent the USDA Forest Service and USDI BLM, but are not considered law officers.  The volunteers serve to educate, enforce, protect and increase agency awareness – among other things – the several thousand annual visitors. For more info, call COHVOPS Coordinator, Dick Dufourd at 541-419-1979.