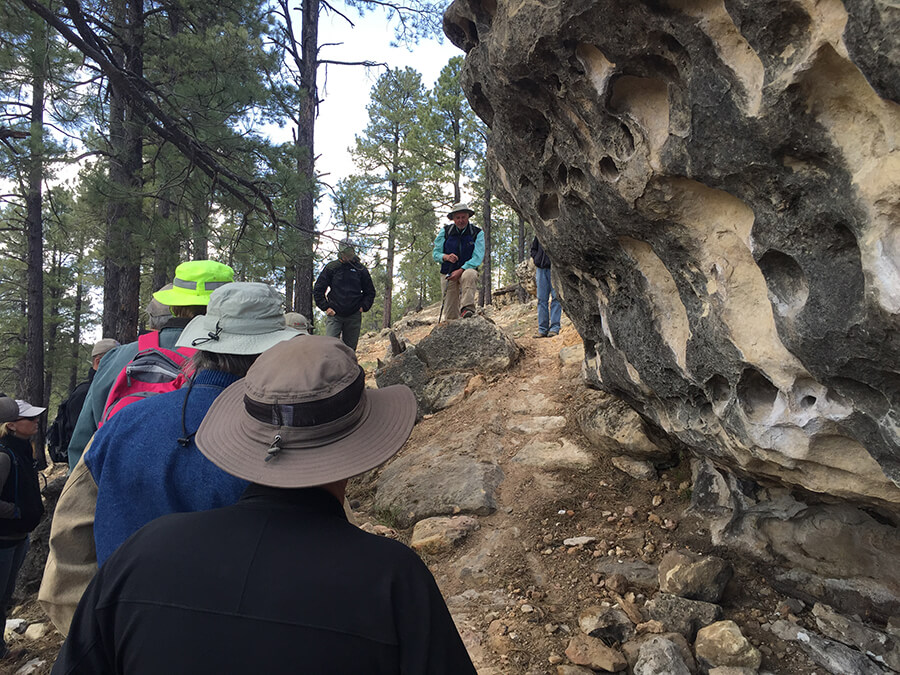 We visited the East Fort Rock riding area in late June as part of the Yamaha Raptor 700R press intro. We were amazed with the trail design, signage and overall makeup. We we will no longer only think of the dunes and western Oregon as “the” place to ride. No sir, the East Fort Rock OHV Trails have proven to be a pillar of strength for OHVs and Oregon’s off-road rock!

Like ski resorts and other well-established ATV trails, this riding area uses colors and shapes as trail descriptions and guidelines. The East Fort Rock trails are two-way trails so signage is a necessity.

A vertical trail marker will be accompanied by a black diamond (most difficult), a blue square (more difficult) or a green circle (easiest). The posts will also have a directional arrow and a trail number. These arrows and numbers came in handy while riding in the thick dust. Because we had to hang back and space ourselves during our ride, the directional markers and trail numbers prevented us from getting lost.

“Reassurance markers” also make up the trail system. These reminder markers informed us that we were still on the correct trail. Depending on their location and the trail design, some markers contain traffic signs like “yield,” “stop,” “caution” and so on.

Others signs warn of logging — duh, this is the Pacific Northwest — and of trail grooming. That’s right, with more than 300 miles of trails and the high-desert soil, the trails need to be regularly maintained.

The good thing about these trails are that you can create any loop you want. As long as the designated roads and trails are open to quads, then you can customize your own scenic trip or race loop. We found it fun to mix in some tight, winding trails with some high-speed runs and hills. But we also loved blasting down some of the shared-use roads, before diving into the woods.

These trails have everything, from rocks to trees to hillclimbs and whoops. One thing we didn’t run across was mud. During our visit, the dry season had just started so the dust was super thick. We had to ride slower than we wanted to because of the conditions and in case someone was traveling in the opposite direction.

One of our favorite trails was No. 70. For one reason, it took us from the Groundhog Quarry Play Area to our staging area at Road 25. This trail is fast and tricky. It invited us to increase our speeds and then, all of a sudden, threw in old volcanic lava flows mid-trail. Due to the jagged rocks, we had to slowly crawl through them before we could continue to explore the trail.

Trail No. 51 was tough. Just think East Coast tree-lined trail and you’ll get the idea. Barely 50 inches wide and with several dozen gnarly, sharp turns, this trail really was difficult. When we combined No. 51 with trail 60, 64, 65 and 50, we created a miniature GNCC course. Let’s just say our hearts were racing and so were we. The dust made it 10 times harder, too.

The East Fort Rock OHV Trail System has three other staging areas. Camp II Trailhead and Road 2510 Staging Area are close to the staging area Yamaha chose (Road 25), but South Lava Trailhead at the far south end of the riding area is next to one of area’s unique play areas.

Speaking of play areas, we spent a couple of hours in the Groundhog Quarry and found it to be fun, but best suited for four-wheel-drive quads. Too many sharp-edge, bowling-ball sized rocks to deal with. However, this spot had a huge gravel pile to play on and, when combined with the surrounding trails (No. 74 and No. 76), was more fun for sport quads.

We didn’t explore the Sabol Butte, South Cinder Cone or the Ice Quarry Play Areas, but we will surely try to hit them all the next time we ride at East Fort Rock.

We were disappointed that we only had one day to explore this area. We recommend an entire weekend — or even a week — to explore the entire trail system. Yes, it’s that good.

Oregon has one of the most strict exhaust decibel level restrictions in all of America. The 93dB level at the Oregon Dunes may just be the strictest. Though not as harsh as the dunes, the East Fort Rock riding area requires all ATVs and motorcycles to meet the DEQ noise standard of 99dB or less (using the 20-inch test). All exhaust system also must use a USFS-approved spark arrestor to be considered “trail legal.” Machines found to be operated without spark arrestors will be fined $100.

It’s also imperative for all visitors to have the appropriate off-road riding permit or “ATV Sticker.” Ride without one an you’ll be fined $75. Quads and motorcycles that are licensed (stickered) in a different state can legally ride the trails. However, if visitors from other states do not have ATV “sticker” programs, they must purchase an Oregon non-resident off-road operating permit. The operating permits are available at the Bend State Park office, GI Joes, Cascade Yamaha-Ski Doo, Bend Recreation, Cascade Motorsports and Central Oregon Workensport.

Any rider under the age of 18 must wear a helmet or they will be assessed a $75 fine. Also, all riders must either show proof of a driver’s license or operator’s permit or, in the case of a minor, must be with an adult who possesses one of these items.

Even though the East Fort Rock trail system has “OHV” in its title, officials make it clear it’s not an off-highway vehicle park. OHVs are allowed on designated routes and area only! The multi-use trails are legally open to ATVs (Class I: quads and three-wheelers) and motorcycles (Class III) less than 50 inches wide.

One reason for the strict OHV guidelines is due to how the trails are funded and maintained. Through a joint effort, the East Fort Rock trails are operated and kept up by the Forest Service, Oregon ATV Fund, Central Oregon Motorcycle and ATV club and various other volunteers.

The Central Oregon Combined OHV Operations Group manages all of the Forest Service and BLM-designated OHV trails in Central Oregon. This group manages seven trail systems and roughly 640 miles of trails, including eight designated play areas. Grants and “agency” dollars provide the COHVOPS with a yearly operating budget of around $340,000. The funds cover the cost of the program and maintain the facilities, trails, signage, fencing and miscellaneous trail expenses. This group also educates and enforces the some 50,000 annual visitors.

A Volunteer Trail Ranger program exists within the COHVOPS. The volunteers officially represent the USDA Forest Service and USDI BLM, but are not considered law officers. The volunteers serve to educate, enforce, protect and increase agency awareness — among other things — the several thousand annual visitors.

Travel on Highway 20 east for 20 miles. Cross the Horse Ridge Summit and turn right on the Road 23 (paved). Go south for 5.5 miles until the road forks. Follow Road 25 (paved) to the right and follow signs to the Camp II Trailhead.

Road 22 is Finley Butte Road. Follow it east for 24 miles and follow the signs for South Lava Trailhead.